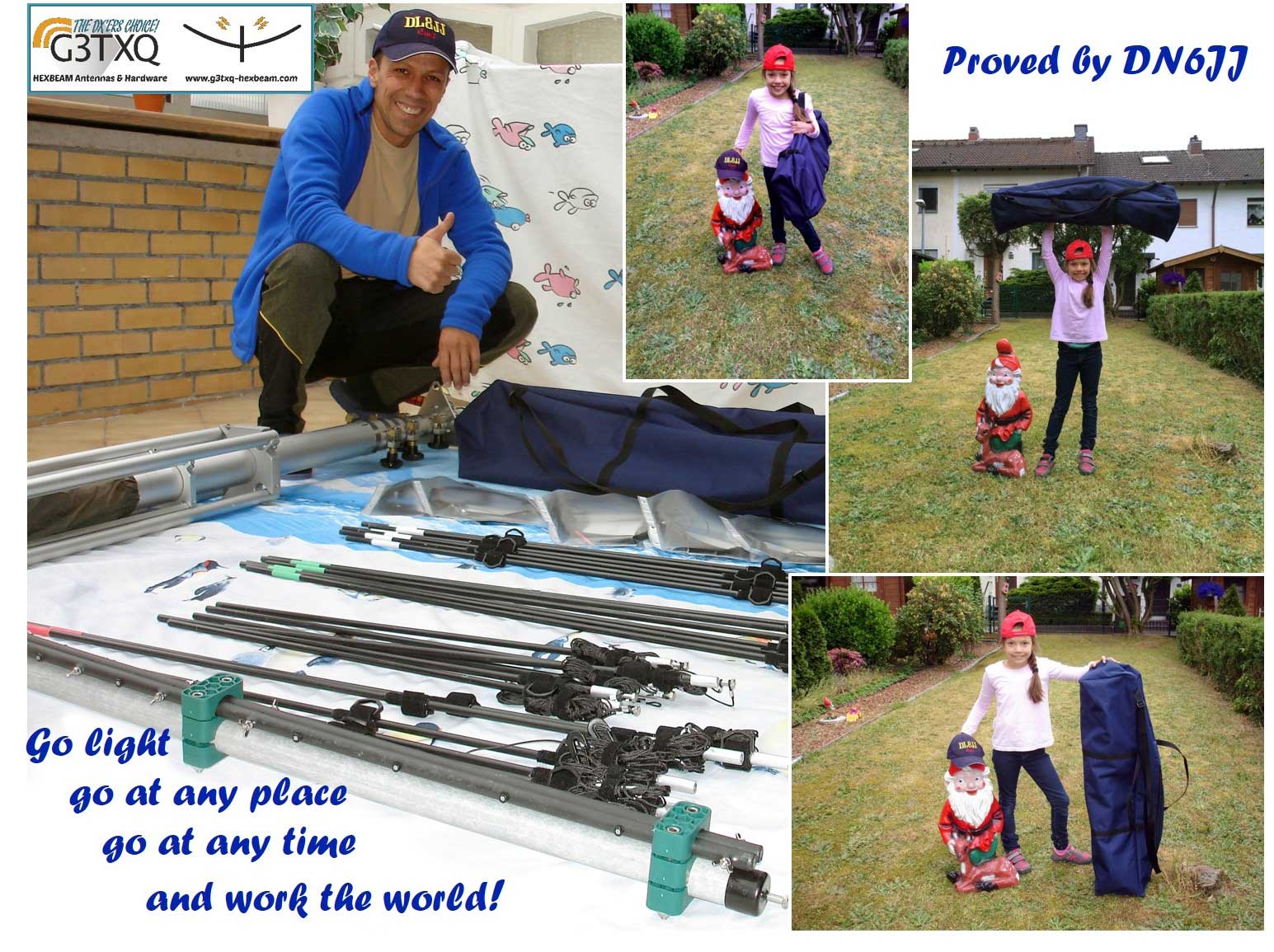 Emil's plans are starting to take shape now, he has his mast and portable Hexbeam ready for field testing this weekend.

MW0JZE Hexbeams are very excited to announce that Emil DL8JJ has chosen the Ultra-Lightweight Portable Hexbeam to activate EU-081 one of Europe's Most Wanted IOTA's Saint Marcouf island.

This is a solo trip but by no means is a lightweight expedition, Emil is taking this very seriously.

His equipment list is quite impressive for a solo operation!

We wish Emil the greatest of success and a safe trip both on and off the island and a big thanks for choosing the all new Ultra-lightweight D-Hexpedition Hexbeam.

As many of you will know the very first transatlantic radio contact consisting of 3 short clicks were sent from Poldu in Cornwall to Signal Hill Newfoundland in Canada at 16:30 GMT on Dec 12 1901. An order was placed by the Poldu Radio Amateur Club for a Hexbeam, I was very excited to see one of my antennas being installed in the exact same location that Marconi sent that very first transmission. 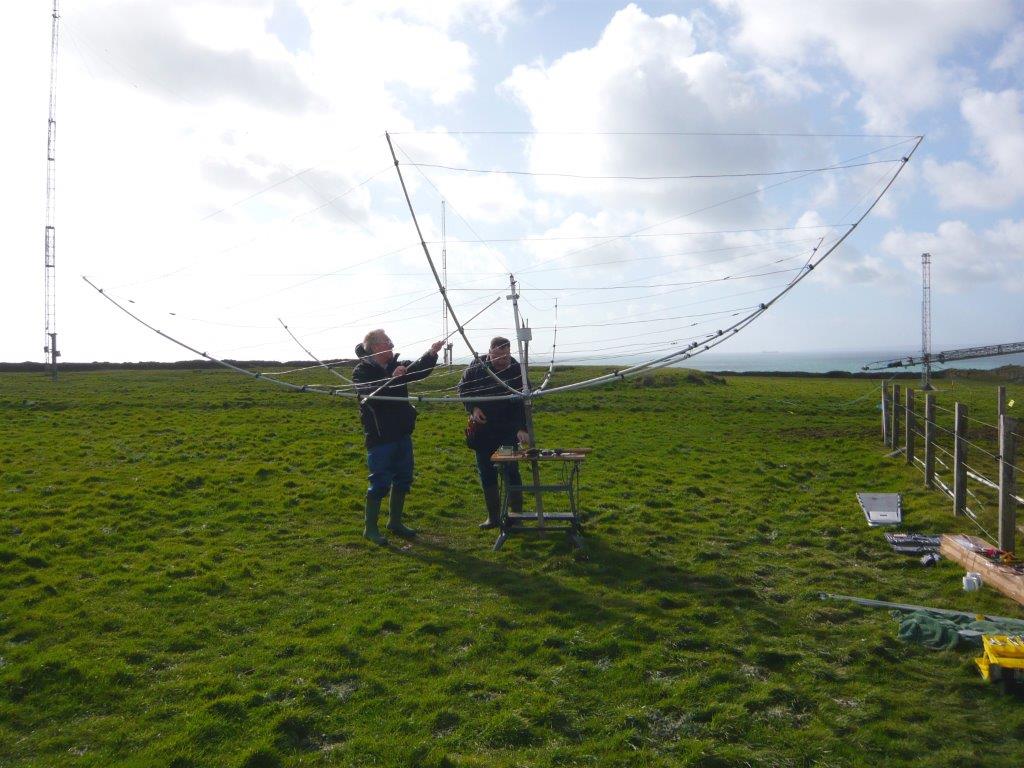 The antenna was delivered this week and the club have had a busy day installing the Hexbeam on a 60 foot lattice tower in the same area that Marconi's antennas were sited over 100 years ago. The rugged Cornish coastline endures some of the strongest wind speeds in the UK so the club decided to install the Xtream WX supports to improve the sturdiness of the antenna for the winter months when the wind speed increases. 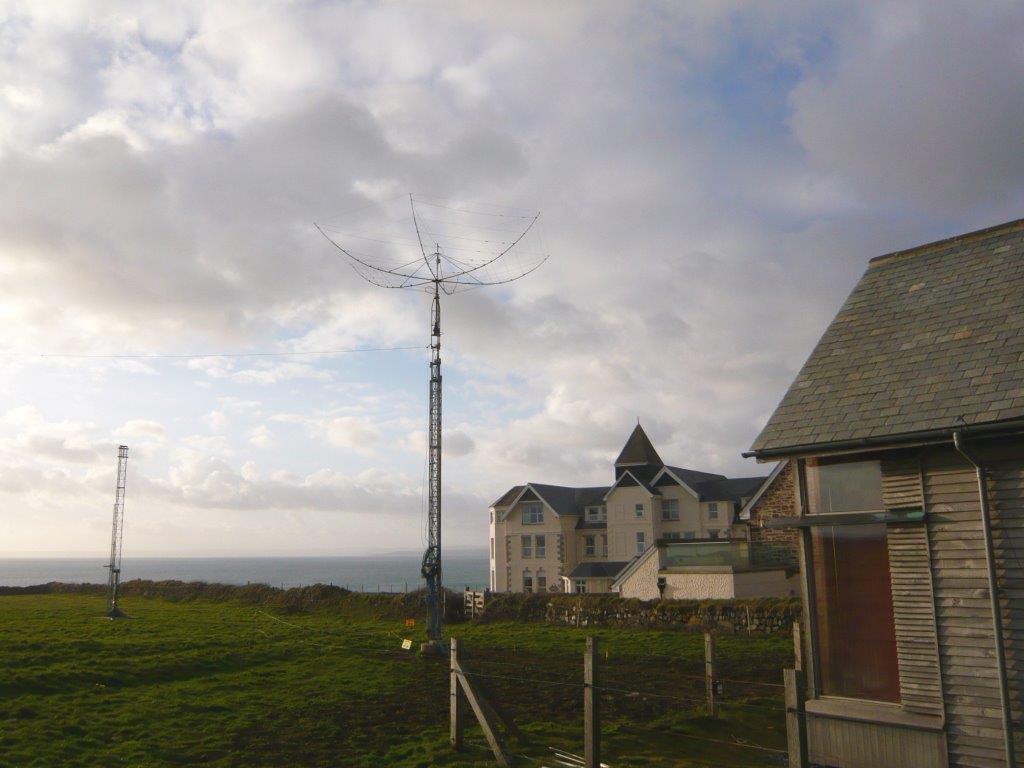 Many thanks to Poldu Amateur Radio Club for their order, I hope to visit the Marconi center this summer with my family.

A few months ago I was asked to supply 1 x Hexbeam to John M5JON for his solo Lundy trip accompanied by his XYL Sarah, attached to that was an invite if I was interested. Was I interested, was I!!!! Always up for an injection of RF and the more remote location the better. As the weeks progressed we were joined by Pete M0ILT and Chris G1VDP. John booked the Stony Croft cottage which to my knowledge is the highest point of the island all apart from the old Lighthouse which was right next to us. A date was set and plans were being made, Mid Oct was decided as the date and we all planned our leave from work.
Three stations were agreed on with two main and one spare:

Unfortunately Chris G1VDP had to pull out with only 6 weeks left before the trip, we made the decision not to replace him confident that we could still manage with 3 ops. We changed the TS 590 to the TS 570, still a great radio.

Wed 10th Oct 2012
John M5JON drove up to Wales to pick myself up (MW0JZE) as I just had two much stuff to carry on the train, almost 60KG, and that was without the Hexbeams!!  Arrived at Johns around 8pm, few glasses of wine and an early night.

Thursday 11th Oct
A 5pm start was needed as the MS Oldenburg sails from Ilfracombe North Devon which is approx. 2.5 hour drive from John M5JON QTH and we also had to pick Pete M0ILT up from Taunton en route. We arrived with 1.5 hours to spare so we found a nice little café were a very welcomed breakfast and coffee awaited us.

The crossing was around 2 hours and we arrived at 12 midday after a few beers on the ship!

As all the baggage is taken to the accommodation we took advantage of a lift in a Landover as the walk up to the small village is quite steep and we wanted to save our energy for setting up the 3 stations.  Due to the workload that the staff had at that particular time we had to wait almost 2.5 hours for it to be delivered, this was cutting it a bit fine to get the 2 hexbeams up before it started to get dark. As the kit arrived we were quickly unpacking all the antennas, none of us had ever worked together as a team before ,

I was impressed how well we all got on and managed to erect the 2 hexbeams, 1x 40m vertical and 3 stations in around 3.5 hours with very strong winds. Each hexbeam was at 6.5m with a 4 way guy system and manual rotation from the base of the mast with rotatable guy rings. The 40m vertical had only 4 radials, we were going to cut more on site but we never did. It worked very well with only 4.

I was the first to call MX0LDG at 20:33 GMT on 40m and was soon running quite a pile-up into EU, IC8AJU was first in the log. 117 stations were logged during the first hour. I was surprised by this as I along with John and Pete thought that Lundy had been done many many times in the past. Station was closed at 22:45 as the power goes off at 23:00 GMT or midnight local time with 182 in the log.

Band conditions were not fantastic but Lundy seemed to be quite wanted by many EU ops on the HF bands. On investigation it seems that many other expeditions to Lundy have been light weight in comparison to what we carried out or mainly on VHF. On times the pile-ups were quite intense logging over 150 per hour at times, this was short lived as the QSB was massive, 59 to 43 in a few seconds which slowed the rate down.

On the Saturday and Sunday there was a Scandinavian contest which made 40, 20, 15 and 10m quite congested so we concentrated on the WARC bands. 17m was very busy but 12m did not come alive until later in the afternoon. 12m attracted quite a few American stations with K5DXX in NM being the best. Total of 16 states being logged along with quite a few South Africans stations around the same time off the side of the beam, not to mention lots of EU.

As the days went past we also tried to take a few breaks for some exploring, we found the Pub and the shop HI. The Pub or Tavern seems to be the centre of the islands activities and is the venue for flight briefings, ships departure updates and any other important information. While most of the cooking was to be done in our cottage it was decided we would spend an evening or two at the Tavern,  the food here is great with plenty of choice from Gammon Egg and Chips (Or was that Ham Pete) to some more rarer menu items such as Goat, I can recommend the Goat personally. John and Pete said I was behaving like a Kid after HI. The shop is where you can stock up on food, drink (beer) and Lundy merchandize ranging from stamps to clothing.

Lundy is home to Three Light Houses Lundy Old Devon ENG 073 (Our cottage was next to Lundy Old) Lundy North ENG 074 Lundy South ENG 075 If you would like to climb up the Old Devon Light ENG 073 you will need to sign a disclaimer saying that you will not jump off the top, I am not kidding here! If you agree not to jump then you will be given the key to exit the light room and walk along the balcony, what a view. I live in South Wales in a town called Llanelli which is approx. 50 miles or 80 Kilometres due north from Lundy across the sea and with binocular’s I was able to see Burry port Light house Wal 035 only a few miles from my house quite clearly. This is a great place to take photos from on a clear day.

We were due to depart the island on the Tuesday afternoon so both Hexbeams, spare station and one main station were packed away. The 40m vertical and one main station were kept up for some last evening’s activity on 40m. With all the gear packed away we returned to the Tavern for the last meal of our stay only to be told that the ship would not be running the next day due to high 60mph winds and high sea swell.

Normally a Helicopter is on standby by to airlift visitors off but there were no spare pilots so an extra day’s stay was enforced upon us! So back to the shack for another day!! 40m opened up quite nicely with many EU stations late into Monday night. Tuesday was very windy as promised and the 40m vert had taken quite a beating by the wind and needed to be guyed more securely. With the built in tuner on the HF amp we tried tuning the vertical on other bands with some success but mainly on 20m as it was acting like a very crude ½ wave. We closed the log with 5078 in the log and last station logged was 9A6TKS.

Wednesday morning soon came around and we were ready to go by 9:30, off to the tavern for a flight briefing. There was a small flight supplement of £27 to pay for the helicopter, this is a cheap opportunity to fly in a helicopter and a first for me! By 18:00 we had dropped Pete off at home and had arrived back in Bristol awaiting my XYL Laura MW6INK to pick me up for my last leg trip home to Llanelli. One small point, Lundy is ONLY 41 miles from my home, it took me 7.5 hours traveling!!! May be I will charter a boat directly next time!

Final stats for MX0LDG are as follows:

A small group of 3 like minded DXer's have come together to form the Lundy DX Group and have obtained the Club call sign of MX0LDG.

They will be running 2 stations, 3 where possible, on all bands from 40m through 6m, on SSB with the possibility of some data modes from 06:00 hrs to 00:00 hrs each day. The islands electricity is turned off between 00:00 hrs and 06:00 hrs every night. This will be sleep time for the ops.

Antennas will be 2 x G3TXQ Hexbeams supplied and built by Ant, MW0JZE, the main sponsor of the activation and a 1/4 wave vertical for 40m.

The log will be uploaded to ClubLog and LoTW.

Please use the OQRS on Tim's website.
DO NOT SEND CARDS FOR THIS ACTIVATION VIA THE BUREAU PLEASE USE OQRS ONLY.