The MS0INT team that will be active from Flannan Island from 18th till the 21st June 2010 will be using a MW0JZE - G3TXQ Hexbeam! Big thanks lads and good luck!

In a Pan-European project, SMØMDG Bjørn, EA3NT Christian, EA2TA George, EA1DR Oscar and leader MMØNDX Col will – weather permitting – try to be active from the remote North Atlantic island group of the Flannans 20 miles north west of the Outer Hebrides of Scotland. Activated in 1989, 1995, 1999 and 2002, the mysterious Flannan Isles are certainly a much needed but extremely difficult to access IOTA.

MSØINT plans to have 3 operational stations manned with 5 operators on air. Our main target will be working as many JA stations as possible. Additionally, we would like to give everyone a fair chance of working the EU-118 IOTA reference.

The Flannan Isles are a small island group in the North Atlantic ocean 32 kilometres (20 miles) west of the Isle of Lewis, Outer Hebrides, Scotland. The archipelago is also known as 'The Seven Hunters'.

The islands are split into three groups. The main cluster of rocks, which lie to the northeast, include the two principal islands of Eilean Mòr (English:Big Isle) and Eilean Taighe (House Isle). The highest point is 88 metres (290 ft) above sea level on Eilean Mòr.

There are two possible landing places to the east and west for yachts visiting Eilean Mòr, although this can be hazardous given the regular heavy sea swells.

Many thanks to Tim M0URX for putting John 9M6XRO in touch with me regarding supplying him with a G3TXQ Broadband Hexbeam. John who is originally from Scotland and holds the call of GM3OOK is now living in Malaysia. We both looked into shipping direct to him but the price was just ridiculous. 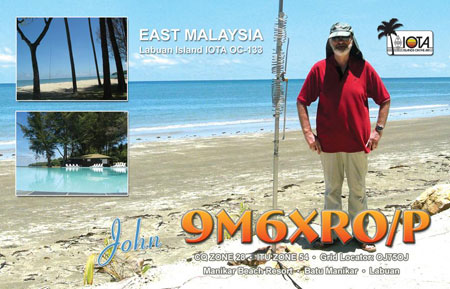 However not all was lost, John was to visit his home-town during the Christmas period so We decided to get it shipped to Scotland and John would take it home via the "oversized Luggage" route :-) The Hex left the workshop on the 14th of Dec and he received it the next day!

John is very active and loves the portable aspect of the hobby and as can be seen from the picture above. Hopefully John will be very active in the coming months and I can bag a few IOTA's off him :-)